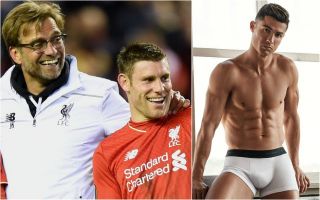 Liverpool star James Milner has hilariously revealed that manager Jurgen Klopp wore Cristiano Ronaldo-branded underwear ahead of coming up against the Portuguese superstar in the 2018 Champions League final.

Klopp’s side lost to Real Madrid that night in Kiev, though luckily for him Ronaldo was not among the scorers on the night or that might have felt a little embarrassing.

As it was, Milner told the Guardian that Klopp seemed to relax his players with this jokey gesture ahead of the game, as he simply lifted his shirt and showed his team his CR7 boxers.

Liverpool fans will love hearing stories like this about their beloved manager, with Klopp always seeming like a real character from what we see of him on the side of the pitch and in his media duties.

There’s bound to be even more stuff like this behind the scenes from the charismatic German tactician, and Milner says all of this is part of a carefully-calculated approach to man-management.

“He thinks deeply about what he’s going to say before a game – and the CR7 thing broke the ice,” Milner said.

“This was just before we went to the ground for the final and we had our usual 15-minute meeting. He just lifted his top and had Cristiano’s boxer shorts on.

“Everyone started laughing – as you would before a Champions League final against one of the best players in the world and your manager’s wearing his boxer shorts. He just relaxed everyone. That’s why he’s such a good manager.”