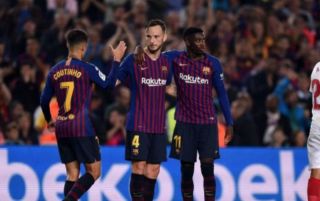 The Croatia international looks increasingly likely to leave Barcelona in the near future after falling out of favour with manager Ernesto Valverde this season.

According to Sport, Rakitic is wanted by Man Utd and is open to a move this January, in a deal that would significantly strengthen Ole Gunnar Solskjaer’s side in a problem position.

The report also states the former Sevilla man is available for a bargain €40million, which could be the best option available for the Red Devils this winter.

Solskjaer is yet to replace Ander Herrera, who has been a big loss after his move to Paris Saint-Germain in the summer, while the likes of Nemanja Matic and Fred have not contributed enough in recent times.

It remains to be seen if Rakitic will have other options, but for now it looks like he’s ready to leave Barca and they’ve cleared him to move on as long as they receive €40m for him.

This is surely a no-brainer for MUFC ahead of January?