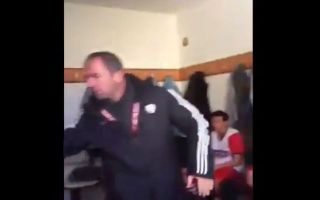 There was some feeling that Celtic might be vulnerable on Sunday after their Europa League heroics against Lazio. Aberdeen is generally a tough place to visit so they may have fancied their chances.

If one single clip told you everything you need to know about the first half, it was Derek McInnes sprinting for the changing rooms in the corner of the ground past thousands of furious Aberdeen fans at half time.

In truth Celtic were sensational, but Aberdeen were so unbelievably passive and just let Neil Lennon’s men stroll through them whenever they fancied it.

A clip has surfaced that gives a pretty good suggestion to how Derek McInnes should’ve handled his players at half time:

The game was completely over as a contest and the game passed without incident in the second half. It took about 70 minutes for Aberdeen to even get a shot on goal.

McInnes has done a great job for The Dons, but he has some serious work to do if he wants to shift the reputation he’s built with his teams bottling it big time against Celtic and Rangers.