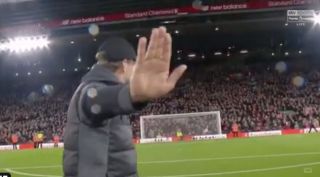 Jurgen Klopp seemingly took a small jab at those who critic his post-match celebrations following his side’s 2-1 win vs Spurs at Anfield on Sunday.

The Reds overcame Pochettino’s side thanks to goals from Salah and Henderson after they’d fallen behind in the first minute via a Harry Kane header.

kLoPp OnLy cEleBRateS fOr tHE cAmERas! ?

The Liverpool manager was on top form as his side restored their 6 point lead at the top of the Premier League table! ?

klopp said sorry the cameras are here so i can’t celebrate ? pic.twitter.com/IgoPnc9Rfe

And after the game, Klopp refused to celebrate in front of the Sky Sports cameras whilst applauding the home fans.

Over the years, Klopp has been slammed by fans for seemingly only celebrating whilst the cameras are on him, however now, it seems like the German’s hit back in style.

Quality from the LFC boss!