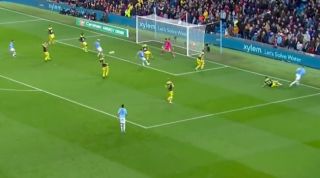 Sergio Aguero has finished off a delightful flowing team move to put Manchester City 2-0 up against Southampton in tonight’s Carabao Cup clash.

The Argentine finishes well from close range after City simply ripped through a hapless Saints side that continue to find themselves conceding at an alarming rate.

Leicester City thrashed Southampton 9-0 in the Premier League on Friday night, and City will now fancy their chances of putting a few more past them as tonight’s game goes on.

Aguero showed all his typical class and composure with his strike and Southampton fans will be worried about him getting more chances like this later in the match.