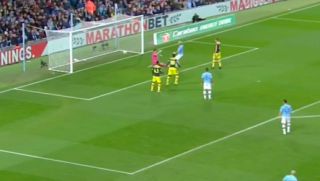 Sergio Aguero has scored again for Manchester City as they race into a 3-0 lead against Southampton in the Carabao Cup.

The Argentine has his second of the night as City surely wrap this game up and book their place in the next round of the competition they won last season.

Pep Guardiola has even had the luxury of resting a few players tonight, but it’s still been pretty plain sailing for City against this struggling Southampton side.

The Saints lost 9-0 to Leicester City in their last game and were never likely to come away without shipping a few more at the Etihad Stadium tonight.