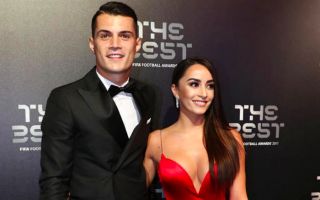 According to the Metro, Leonita Lekaj has made her account private following abuse aimed her way over her husband’s behaviour in Arsenal’s 2-2 draw with Crystal Palace on Sunday.

MORE: Unai Emery blasted by pundits and blamed for contributing to Arsenal storm with Granit Xhaka

Arsenal fans are clearly not reacting well to Xhaka after his tantrum at the Emirates Stadium, and this image below suggests some supporters have been sending messages Lekaj’s way as well.

This follows Xhaka reacting angrily to jeers from the home crowd as he was subbed off by manager Unai Emery in the second half of the Palace game.

The Switzerland international cupped his hand to his ears and appeared to tell the booing fans to ‘f**k off’ as he stormed off down the tunnel rather than taking his place on the bench.

It’s hard to imagine how Xhaka can repair his reputation with Arsenal fans after this, and many will argue that those who pay to watch games and contribute towards his wages have every right to voice their displeasure at how he’s performing.

Still, there is surely no need to bring his wife into this and it sums up the sad state of social media at the moment that people have felt compelled to drag his family and loved ones into this when it’s got nothing to do with them at all.