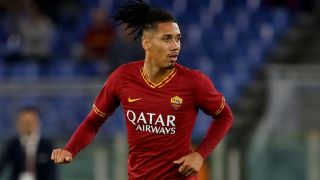 Chris Smalling is seemingly feeling pretty pleased with himself after being made aware of an impressive stat from his season with Roma so far.

As noted by Sky Sports, it has been suggested that Man Utd fully intend on recalling him back to Old Trafford when his season-long loan deal ends with the Giallorossi.

Given his form so far this season, that would seem like the sensible thing to do, but much will of course surely depend on the centre-half’s possible desire to stay in Italy if he continues to impress for the Serie A giants.

The move to Rome has clearly been a good one for his career thus far though, as the stat below emerged which suggested that he has won 100% of his tackles in Serie A and the Europa League to date to show that he is undoubtedly playing at a high level.

In the five Serie A games that he has featured in so far this season, Roma have conceded just four goals and so that importantly shows how his impact is directly effecting results and the progress of the side as a whole.

In turn, time will tell if they try their best to convince Man Utd to allow them to keep Smalling on a permanent basis, while it remains to be seen what his intentions are moving forward if he settles in Rome and wants to continue his challenge abroad.

However, he is clearly loving his time and influence in Italy so far for Roma, as seen in his tweet below, as he took time out to revel in the impressive stat and make his followers aware of just how well he is adapting to Italian football.

It remains to be seen if he can maintain that level of consistency between now and the end of the season, but for now, he can be pleased with what he’s doing and it will undoubtedly make Man Utd aware with a view of Ole Gunnar Solskjaer wanting him back next season to play a key role.

Not doing too badly then ? https://t.co/eQm0DHPOCR