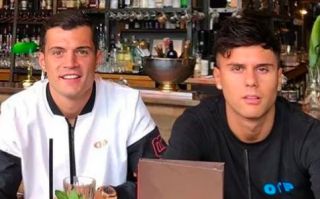 A close friend of Arsenal captain Granit Xhaka has hit out at the treatment of his pal by some Gunners supporters on Sunday.

Xhaka notably goaded the home crowd as they jeered him when his name was read out as being substituted by manager Unai Emery against Crystal Palace.

Xhaka’s future as Arsenal captain now looks in some doubt, with the Switzerland international not a particularly popular choice for the role in the first place.

Still, the 27-year-old has the backing of his best mate Patrik Dibrani, who hit out at the ‘tourists’ who booed the player at the Emirates Stadium.

Dibrani also revealed in an interview with the Sun that he is a Manchester United fan, so we’re not sure Gooners are going to think too much of his comments anyway as he may be slightly biased against the north London side.

He does make some fair comments, however, about the work players do behind the scenes that fans perhaps don’t appreciate, which some at AFC games could do well to take on board after a poor recent history in terms of the treatment of their players and even former manager Arsene Wenger.

“There should be no place for booing your own players,” he said.

“I spoke on the phone to Granit after the game. He’s not in a good place – he is grief-stricken.

“I think the fans who slaughter him are tourists. They are not genuine supporters.

“Granit does everything for his football. He had a personal trainer, and missed out on partying. Then he gets abused in the stadium and on social media. The comments are below the belt.

“He regretted his actions straight away. He is an emotional person.

“At Basel he was an undisputed first-teamer aged 18, and he was Borussia Monchengladbach’s youngest ever captain. Now he gets slaughtered without mercy. It is not fair.

“Swiss people have to be proud that one of us is captain of one of the world’s biggest clubs.

“But the blame for Arsenal’s entire situation is being placed on Granit’s shoulders.

“I am a Manchester United fan, and both they and Arsenal have been off the top of English football for five or six years.”