Chelsea will be nailing down the final preparations for their mammoth Carabao Cup clash against rivals Manchester United at Stamford Bridge tomorrow evening.

The Red Devils thrashed the Blues 4-0 on the opening day of the Premier League season.

It’s highly likely that both sides will be rotating their teams considerably tomorrow evening, this should give Chelsea fans the opportunity to see even more of their young talents in action.

The sides that are put out will also be dependent on which stars are back from injury.

Football.London understand that Andreas Christensen and Ruben Loftus-Cheek are still sidelined with injuries. Midfielder Ross Barkley is touch and go for tomorrow’s tie after dealing with an ankle injury.

Goal’s Chelsea correspondent Nizaar Kinsella revealed that Lampard saw tomorrow’s clash as a “game that may be an opportunity for players who are not playing.”

It was also added that stars N’Golo Kante and Antonio Rudiger aren’t ready to return to action just yet. The United clash seems to have come a little too soon for the key duo.

As well as reintegrating some players into the team and giving youngsters the chance to impress; it’s likely that Lampard will rest some of his stars for tomorrow’s clash.

Here’s how we think the Blues will line up: 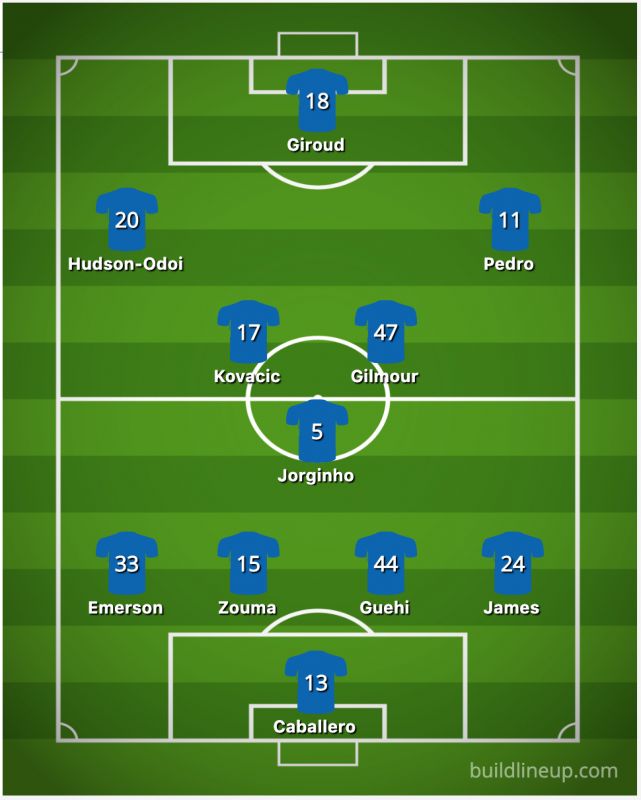 Between the sticks it seems like a good idea to give Willy Caballero some time in the first-team. This will keep Kepa’s backup sharp as the season goes on.

We expect the most changes to be made in defence. Promising youngsters Reece James and Marc Guehi deserve the chance to start for the Blues.

Kurt Zouma could be the only defender to retain his place in the starting lineup, Fikayo Tomori may deserve a rest for all his hard work this season.

Emerson can fast-track his journey to getting back to his best by testing himself against United’s dangerous wingers tomorrow.

Starlet Billy Gilmour could form the midfield trio alongside Jorginho and Mateo Kovacic. Given that the side’s defence seems the most likely to change – a largely experienced presence in the middle of the park is Chelsea’s best bet.

Pedro seems like he could get the taste of first-team action after experiencing a lesser role for the side so far this season.

Wonderkid Callum Hudson-Odoi could operate on the opposite flank – or will Lampard hand Christian Pulisic another start after his hat-trick on the weekend.

It seems to be a 50/50 on who will lead the line between Olivier Giroud and Michy Batshuayi. Giroud hasn’t featured in over a month and we think Lampard will call on the target-man’s experience tomorrow.