Liverpool are back in action on Wednesday night as they take on Arsenal in a big game in the Carabao Cup.

The Reds have already beaten the Gunners at Anfield this season, winning 3-1 in their Premier League clash back in August.

However, we are surely set to see much-changed teams from both clubs this week, and LFC fans can get excited about seeing some of their top young talent getting playing time.

On top of that, this is also a chance for squad players to show what they can do, with the likes of Naby Keita and Alex Oxlade-Chamberlain sure to start and show that they could be worthy of more Premier League minutes soon as well.

According to the Liverpool Echo, it looks like a number of youngsters have been called up for first-team training ahead of this game, but it remains to be seen which ones will actually make it into Jurgen Klopp’s starting XI.

Still, we think it would be great to see something like this from Liverpool… 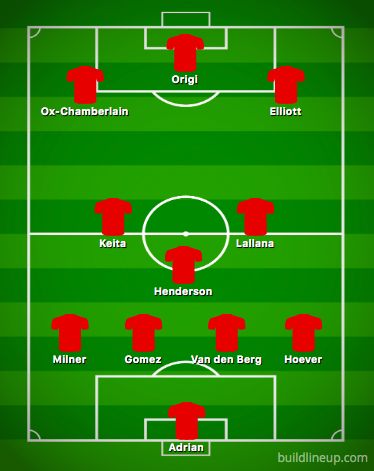 Adrian returning in goal makes sense as Alisson could probably do with a breather after his recent return from a lengthy layoff, while James Milner and Jordan Henderson seem likely to be two regulars who could be involved.

Liverpool fans will be eager to see the likes of Sepp van den Berg and Ki-Jana Hoever get a chance as well, while Harvey Elliott could also start again in attack after also making it into the team that beat MK Dons in the last round.

It remains to be seen precisely how Oxlade-Chamberlain could be used, but it may be that he’s most useful as part of the attack here, with Naby Keita and Adam Lallana part of the midfield three.

Divock Origi makes sense as starting at centre-forward, though there will also hopefully be a chance for Rhian Brewster to come on later in the game.