Manchester United seem to be finding some rhythm again after a poor start to the season, with Ole Gunnar Solskjaer bound to be much happier after his side’s last three games.

The Red Devils have two wins in a row against Partizan Belgrade and Norwich City, and were close to beating league leaders Liverpool after a fine performance in that Premier League clash at Old Trafford.

United must now take on an in-form Chelsea at Stamford Bridge in Wednesday night’s Carabao Cup clash, with Solskjaer needing to get his team selection spot on for this one.

This competition could represent a genuine chance for Man Utd to pick up some silverware this season after two campaigns in a row without winning anything.

That said, Solskjaer will also want to use his squad carefully and see if he can take a look at some of his promising youngsters.

As quoted by the Metro, the Norwegian tactician has hinted that impressive duo Brandon Williams and James Garner could be involved for this one, and we’ve also stuck Mason Greenwood up front to give Marcus Rashford a much-needed breather… 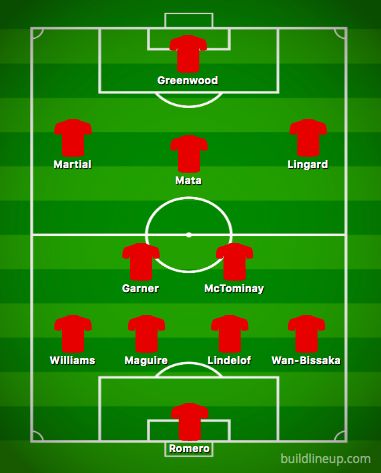 There also seems likely to be room for Juan Mata and Jesse Lingard in the starting XI, with both players urgently in need of a big performance to show they can still contribute to this United side.

Elsewhere, it perhaps makes sense for Solskjaer not to take too many risks and include regulars like Harry Maguire, Scott McTominay and Aaron Wan-Bissaka against such high-quality opposition.

MUFC fans will hope to see academy talents like Williams, Garner and Greenwood flourish if given an opportunity here, as all three could well be upgrades on the likes of Luke Shaw, Fred, Rashford and other struggling first-teamers.