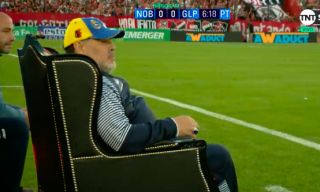 Footballing legend Diego Maradona is enjoying watching his Gimnasia team from a pretty comfortable chair that almost looks fancy enough to be a throne.

In fairness, the Argentine is one of the all-time kings of the game, so it’s only right that he gets himself a proper seat from which to watch over his side.

Yes, that really is Diego Maradona signing his own throne ?pic.twitter.com/FkPvzl9w4F

We’re not quite sure what the story behind this is, but it’s the latest in a long line of amusing eccentricities from Maradona.

The 58-year-old has had other unsuccessful management ventures in the past, and took his current job with Gimnasia earlier this year.