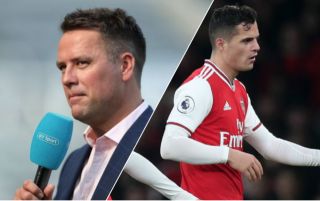 Michael Owen took to Twitter to criticise Arsenal fans for their double standards yesterday, after they booed Gunners skipper Granit Xhaka off vs Crystal Palace on Sunday.

Emery’s side succumbed to a 2-2 draw with the Eagles on Sunday evening despite leading the match 2-0 at one point, with tensions clearly high in the second half after Xhaka was subbed off.

The Swiss international was replaced by Saka just an hour into the game, with the home faithful booing him as he slowly strode off the Emirates pitch.

Xhaka then snubbed Emery after being taken off, as he swore at some of the home support before walking straight down the tunnel towards the dressing room.

A lot has been made of this situation since then, with loads of figures at Arsenal coming out and speaking on the now-infamous incident against Palace.

And now, Premier League legend and pundit Owen has offered his two cents on the situation on Twitter.

Owen took to the social media site to slate Arsenal for their double standards regarding Xhaka, with the ex-Liverpool man also questioning the whereabouts of the squad’s unity.

Totally agree.
About time somebody went against the grain.
Is Xhaka a great player? No.
Should he react like that? No.
But if 60,000 fans boo you off? Where’s the unity?
Expect him to die for the shirt one minute then walk off to a cauldron of hatred the next?#DoubleStandards https://t.co/BfLqJ7Nowh

It’s definitely going to be interesting to see how Arsenal fans treat Xhaka from here on out, as their side look to pick their form up in order to help them secure a top four finish come May.

It’s also going to be worth seeing what AFC do about their captain situation following Xhaka’s actions on Sunday, as how he reacted to being taken off simply wasn’t acceptable from any player, let alone your club captain.