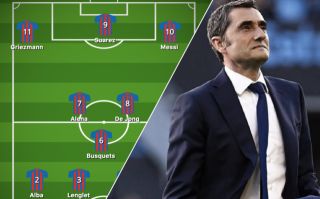 Barcelona take on Real Valladolid in La Liga on Tuesday night, as the Blaugrana look to continue their fine form in the league with a win against Sergio Soriano’s side.

Barca have won their last four games in La Liga since they tasted defeat to top-of-the-table Granada back in September, with this victories also being joined by wins against Inter and Slavia Prague in the Champions League.

The Blaugrana will make it seven wins in a row in all competitions this evening should they claim all three points against Valladolid at the Nou Camp, a feat that shouldn’t be too tricky given their opponents’ away form this term.

Valladolid have lost two and drawn two of their six away league fixtures this year, form that should fill the home support with confidence going into the match.

Going into the game, Valverde has got one or two selection choices to make, with one of these concerning who he decides to start in midfield.

Arthur Melo has been left out of the club’s squad for today’s game, with Carles Alena claiming a place instead.

And given how the Spaniard has performed for Barca in the past, we believe he should be claiming a start over the likes of Vidal and Rakitic in the centre of the park tonight.

De Jong and Busquets should be elected to keep their places in Barca’s midfield following their recent form, thus we could see them joined by Alena if Valverde opts to go with the youth.

With Ousmane Dembele suspended for this match, we should see Griezmann, Suarez and Messi lead the line for the Blaugrana once again, however don’t be surprised if Ansu Fati is given a run out.

With both Pique and Lenglet having served their suspensions, we should see them reclaim their places at centre-back, with the duo joined by Alba and Semedo at the back.

With all this in mind, here’s how we think Barcelona should line-up at the Nou Camp for tonight’s fixture. 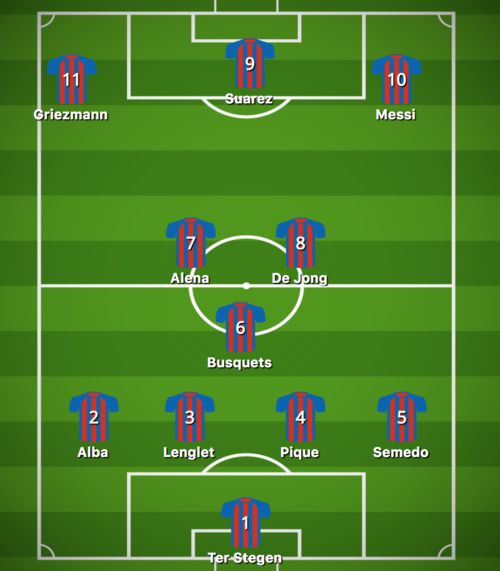