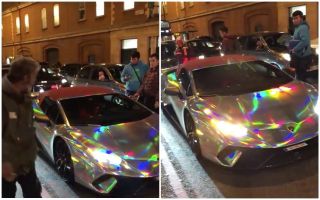 Some Arsenal fans have been filmed shouting abuse towards star player Pierre-Emerick Aubameyang whilst he was driving. These fans should be punished.

Twitter user @stuafc71 has this evening shared a disturbing clip of Arsenal superstar Pierre-Emerick Aubameyang being abused by some fans, with one calling the forward a “w**ker” and another telling him to “f*** off”.

The star striker was driving his chrome Lamborghini through London when the incident occurred, going off the footage it appears as though Aubameyang refused to sign some things for the supporters.

Given that the former Borussia Dortmund star has been filmed doing this on several occasions when he’s out driving, we suspect that something more must have gone on for the ace to refuse fans’ demands.

One supporter, who the capturer of the video names as Preciana Brown was heard saying “£2000 a year to watch shit? F*** off” to the superstar.

Take a look at the unpleasant footage that will soon be viral on social media:

Preciana brown shouting abuse at @Aubameyang7 after the game on Sunday; “£2000 a year to watch shit? Fuck off”.

Then it puts them off stopping for legit fans pic.twitter.com/VFDnjmL42Z

Some members of Arsenal’s fanbase seem to be very toxic, whilst we don’t know the whole story just yet – this kind of abuse towards arguably the club’s best player is uncalled for to say the least.

If one of team’s best players can’t avoid abuse, what hope is there for anyone else in the Arsenal squad?