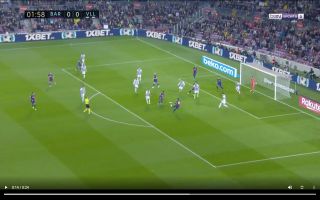 Barcelona defender Clement Lenglet handed the Blaugrana the lead with a spectacular volley in this evening’s La Liga clash against Real Valladolid. What a hit.

It took Barcelona less than two minutes to take the lead against Real Valladolid thanks to this superb strike from defender Clement Lenglet.

Lionel Messi curled a cross into the box after Barcelona’s corner was cleared, the five-time Ballon d’Or winner’s pass was cleared but the ball spilled out to Lenglet.

The centre-back unleashed a vicious left-footed volley on goal which took a deflection before it hit the back of the net.

Take a look at the Frenchman’s opener below:

WHAT A HIT FROM LENGLET pic.twitter.com/mSvhFnxrDI

There was some serious power on Lenglet’s volley.