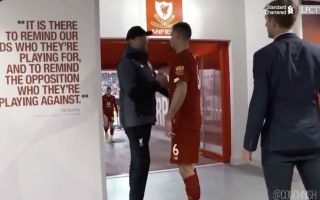 Jurgen Klopp stopped Dejan Lovren on his way back to the Liverpool dressing room to acknowledge his strong display against Tottenham on Sunday.

Spurs took the lead in the Premier League clash at Anfield via a Harry Kane header with just 47 seconds on the clock and held onto their slim advantage until the early stages of the second half.

Jordan Henderson eventually ended Tottenham’s stubborn resistance, firing the ball into the far corner of the net after latching onto a superb Fabinho pass.

Mohamed Salah’s late penalty ensured a 2-1 win for the Reds which restored their six-point lead over reigning champions Manchester City at the top of the Premier League table after 10 fixtures of the new season.

Lovren retained his place in Klopp’s starting XI in the absence of the injured Joel Matip and played a key role in keeping Tottenham’s attackers quiet for large portions of the game.

Klopp embraced the Croatian centre-back in the tunnel after the final whistle to congratulate him for his performance, in a great moment which shows just how close the German boss is with his players.

Check out their celebrations below.

Klopp and Lovren after the Tottenham game

Some fans might not rate him but the manager definitely does pic.twitter.com/DxySlcaguX

Nothing makes me happier than seeing Klopp like this with players who have been on the fringes and can come in and do a job in a big game.

We know Lovren is far from perfect, but he loves our club and decided to stay around to help us.

Look at how much Klopp appreciated him ?? pic.twitter.com/RAPTECx0Mc