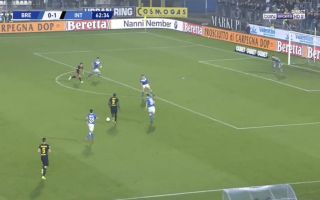 Romelu Lukaku’s superb 63rd-minute strike from outside the box has put Inter Milan 2-0 up away to Brescia on Tuesday night.

Inter have taken control of tonight’s clash at Stadio Mario Rigamonti and look set to return to the top of the Serie A table ahead of Juventus, who play Genoa on Wednesday.

Lautaro Martinez’s deflected effort gave Antonio Conte’s side a first-half lead and Lukaku has doubled the visitors’ account just after the hour mark, in spectacular fashion.

The Belgian striker scored a 25-yard thunderbolt after cutting in from the right-hand side, which marks his seventh goal in 10 appearances for Inter since his summer move from Manchester United.

What has happened to Romelu Lukaku? Is this the same player that played for Man United?

This is by far the best Lukaku goal ever. Where was this guy hiding. ?? pic.twitter.com/X9gPovFKdl