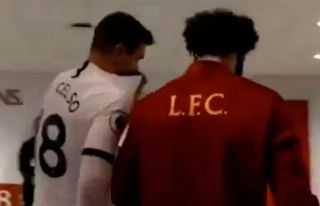 Liverpool saw off Tottenham in a 2-1 win at Anfield on Sunday and Giovani Lo Celso was seemingly keen to swap shirts with Mohamed Salah after the game.

On the face of it, there surely doesn’t appear to be too much wrong with it as ultimately it’s two players showing sportsmanship and Lo Celso clearly respects the Liverpool talisman enough to want his jersey after going up against him in a battle between their two sides.

While there may have been another reason for his desire to get Salah’s shirt too, perhaps a family member was particularly keen to get hold of one, Lo Celso has seemingly managed to draw the ire of a minority of Tottenham fans with his actions.

In their defence, it does seem a bit over the top if he did actually wait specifically for Salah at the end of the tunnel to get his shirt as some pundits certainly wouldn’t have liked it (Roy Keane), but it’s surely nothing to get too upset over.

Nevertheless, as seen in the tweets below, some Spurs fans weren’t happy with the Argentine ace, while others dismissed it as a nothing moment that doesn’t warrant any criticism of the Tottenham ace.

Perhaps it was a frustrated response due to the result more so than Lo Celso’s action, but he may well have to think twice about his shirt-swapping technique to avoid further scrutiny in the future.

Lo Celso waited for Salah to get his shirt. ? pic.twitter.com/McLDN8GhPX

I was well up for Lo Celso starting this Sunday but after seeing this, I think I’d rather watch Eriksen passing the ball to the opposition for 90 minutes. https://t.co/ejHKRBS3mx

Lo celso couldn't wait to swap shirts with Salah then. If he only has a tourist attitude perhaps it's better hes only on loan

Nothing wrong with that..How ever.. spurs loss with a PK by Salah.. so stupid lo celso should have at least some dignity…Is not an international Argentina Egypt.what an idiot for me

Absolute state of this. We have just lost a game and lo celso is more worried about getting salah's shirt. The same player who scored the pen to beat us.

Absolute state of it

Lo Celso waited in the tunnel for Salah to get his shirt after our 2-1 defeat at Anfield. pic.twitter.com/NABO9e8LIB

A few months with Poch and Lo Celso has already lost any winning mentality he might have had.

Embarrassing from another premier league player ????????

Not great is it. I’d rather he be devastated like Sonny was and not thinking about swapping shirts with an opponent who just scored the winner against us.