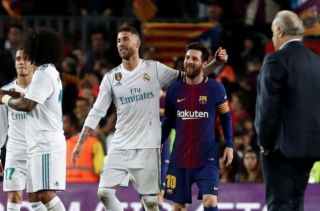 Sergio Ramos scored from the penalty spot this evening, as he helped Real Madrid overcome minnows Leganes at home in La Liga.

Having originally missed his penalty, the referee ordered Ramos to retake it after the Leganes ‘keeper was adjudged to have come off his line, with the Spaniard then converting the re-taken spot-kick moments later.

Real went on to win the match 5-0, as they closed the gap on league leaders Barcelona to just one point, with goals from Hazard, Benzema, Kroos and Rodrygo, as well as Ramos, helping Los Blancos claim all three points in the Spanish capital tonight.

Following his goal against Leganes, Ramos has now become the first player since Lionel Messi to score in 16 consecutive La Liga seasons.

16 – Sergio Ramos is the second player to score at least once in each of the last 16 LaLiga seasons, after Lionel Messi. Icons. pic.twitter.com/7JuH2mpufY

This feat is impressive for any player, however it’s even more impressive when you realise Ramos has played as a defender for all of his career.

Albeit the Spaniard has taken his fair share of penalties and free-kicks over the years, the fact he’s scored at least once in the last 16 La Liga campaigns is absolutely ridiculous.