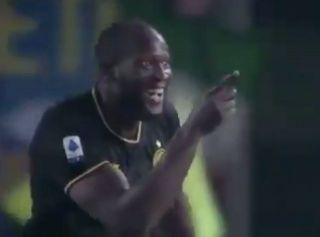 Romelu Lukaku appears to be enjoying himself in Italy so far, and his relationship with Inter boss Antonio Conte is perhaps a key reason behind that.

The Belgian international left Man Utd this past summer after a disappointing season last year in which he struggled to showcase his best form.

With Ole Gunnar Solskjaer seemingly moving in a different direction and looking for something different from his frontman, Lukaku was allowed to leave and the decision to link up with Conte at Inter is proving to be a hugely successful one.

While the Nerazzurri lead the way in Serie A, albeit Juventus can leapfrog them with a win on Wednesday night, the 26-year-old Belgian forward has now bagged seven goals in 10 Serie A appearances.

In turn, he is proving to be the talisman that Conte undoubtedly signed him to be, and so now time will tell if he can stay consistent and continue to produce between now and the end of the season.

Based on the celebration below though, which fans loved as per their responses, it looks as though Conte is getting the best out of Lukaku with his own management style as the pair celebrated together after his superb strike against Brescia in midweek which sealed all three points.

Honestly, am genuinely happy Lukaku is thriving & scoring goals for Inter + Hiz bromance with Conte is something to admire. If its meant for you then its gonna come to you

The Coach-player romance between #Conte and #Lukaku at @Inter_en is so sweet to watch, just like a Father-son relationship, I love it ? pic.twitter.com/SMHMNtdQt7