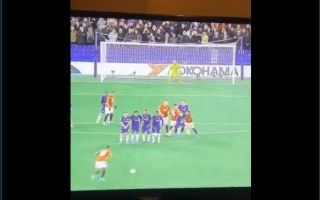 We were probably all fairly stunned by Marcus Rashford’s free kick tonight. Mainly because it was such a fantastic strike, but also because he’s taken so many awful ones that expectations were significantly lowered.

If he keeps this up he might even enter that Roberto Carlos territory, where we know he is capable of it but also deep down we all think it’s most likely to thunder into the wall.

This camera angle caught the reaction of Anthony Martial, who looked a mixture of shocked and confused as it struck the net:

The look on the face of Martial says it all. Superb goal and a great away win https://t.co/Bn3OHeGHh7

Rashford will go out of this game feeling pretty pleased with himself, he’s proved to be the match winner and secured his place as the main penalty and free pick taker for at least a few more games.