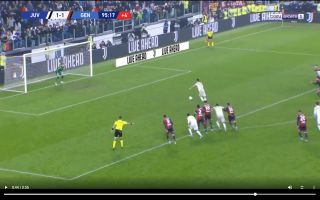 Superstar Cristiano Ronaldo has come up clutch for Juventus with a game-winning penalty in the last minute of their Serie A clash with Genoa this evening.

In the final moments of Juventus’ Serie A clash with Genoa this evening, superstar Cristiano Ronaldo used his stunning skills to win a penalty for the Old Lady.

The 34-year-old was brought down in the box by striker Antonio Sanabria after pulling off some trademark silky stepovers.

The former Manchester United and Real Madrid star stepped up to the spot and fired the ball into the bottom corner to seal a last-gasp win for Maurizio Sarri’s side.

Take a look at the five-time Ballon d’Or winner’s game-winning spot-kick below:

Ronaldo’s game-winning strike came just a couple of minutes after a potential winner was ruled out for offside.