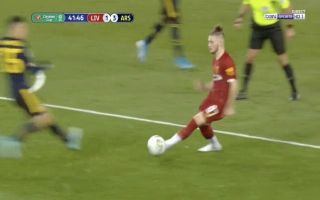 Liverpool have hauled themselves back into a Carabao Cup fourth-round clash against Arsenal in controversial fashion on Wednesday night.

Shkodran Mustafi put through his own net in the sixth minute to give the Reds the perfect start at Anfield, but a Lucas Torreira goal and a brace from Brazilian striker Gabriel Martinelli saw Arsenal complete a remarkable turnaround before the 40-minute mark.

16-year-old’s Harvey Elliott’s loose pass led to Martinelli’s second goal, but he has since redeemed himself by winning a foul for Liverpool in the Arsenal penalty area.

Martinelli didn’t appear to make much contact with the teenage midfielder, but the referee pointed to the spot and James Milner stepped up to covert to make the scoreline 3-2 heading in at half-time.

Arsenal fans were left fuming after the soft penalty decision, with one supporter writing that Elliott was guilty of a “disgusting dive” on Twitter.

Disgusting dive. You won’t here anything about it though as he’s young and english.

Check out some more comments from supporters criticising Elliott below.

Why is everyone scared to say it was a dive? Never a penalty

That dive literally gets worse every time you look at it

Such a blatant dive for the penalty shortly after giving away third goal, Harvey Elliott has a lot to learn still. Impressed by Arsenal so far. Martinelli has been great signing. #bbcfootball

Liverpool’s game came from an own goal and a dive

Liverpool training – Mane & Salah teaching the youngsters how to dive.