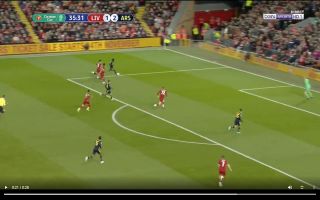 Arsenal pounced on an error from talented ace Harvey Elliott to make it 3-1 against Liverpool in the Carabao Cup this evening, take a look at Martinelli’s goal below.

In the 35th minute of this evening’s mammoth Carabao Cup clash, Liverpool starlet Harvey Elliott played a risky pass back towards Joe Gomes that was picked up by Mesut Ozil.

The superstar playmaker knocked the ball into the path of exciting winger Bukayo Saka and the Arsenal academy graduate played an inch-perfect pass across goal towards Gabriel Martinelli.

The 18-year-old slotted the ball into the back of the net with a composed finish.

Take a look at the Samba star’s second of the night below:

Arsenal have looked much more clinical going forward against the Reds tonight. Is this because of Liverpool’s youthful side or because of Mesut Ozil?

Martinelli scored his first of the evening just 10 minutes earlier, the ace showed his natural goalscoring instinct to pounce on a chance and score, take a look here.