Joe Willock scored an absolutely insane goal for Arsenal this evening, as he handed the Gunners a 5-4 lead in their clash against Liverpool at Anfield.

Having just equalised minutes earlier, Liverpool soon found themselves behind again after Willock scored one of the best goals you’ll see this year.

Absolute stunner from Willock has Arsenal ahead at Anfield again!

The Englishman picked the ball up just before the halfway line, as he strode forward before unleashing a 30-yard thunderbolt into the Liverpool goal. 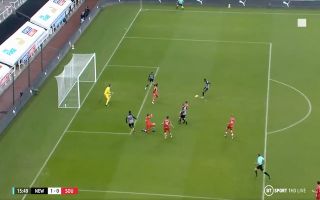