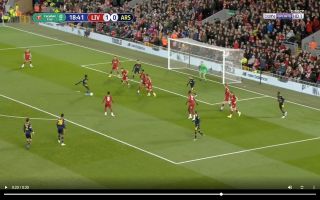 Arsenal have equalised against Liverpool in this evening’s mammoth Carabao Cup encounter with a controversial goal from Torreira, the ace seemed to be offside.

In the 18th minute of this evening’s clash, Mesut Ozil picked out Arsenal youngster Bukayo Saka with an inch-perfect pass and the ace’s shot on goal was denied by a brilliant Caoimhin Kelleher save.

Unfortunately for the Reds, the ball spilled out to Lucas Torreira and the combative midfielder tapped the ball into the back of the net.

Jurgen Klopp’s side are quite unlucky, replays show that Torreira was in an offside position when Saka attempted his shot. VAR probably would have ruled this one out.

Take a look at Arsenal’s equaliser below:

Lucas Torreira appears offside as he taps home Arsenal's equaliser – No VAR in the Carabao Cup!

I guess it’s fair for Arsenal to benefit from a stroke of luck after Mustafi’s horror own goal handed Liverpool an early lead.