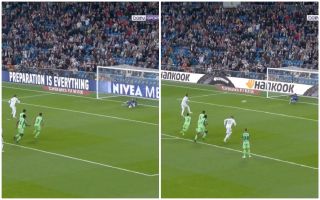 Real Madrid captain Sergio Ramos had the chance to rectify his penalty miss against Leganes after VAR ruled on a retake, the skipper confidently put away his second attempt.

In the 22nd minute of this evening’s La Liga clash between Real Madrid and Leganes, Eden Hazard won a penalty for Zinedine Zidane’s side after being brought down by the goalkeeper following a tidy piece of skill.

Skipper Sergio Ramos stepped up to take the spot-kick and he saw his effort saved by Juan Soriano. Fortunately VAR ruled that the stopper jumped too early off his line and Ramos was awarded a retake.

Ramos went for the opposite corner the second time round and extended Madrid’s lead to 3-0.

Madrid made it 2-0 with less than 10 minutes played after Rodrygo and Toni Kroos scored just 90 seconds apart from each other, take a look here.

Take a look at the Real Madrid captain’s spot kick’s below:

Madrid were pretty fortunate to get a second attempt, Leganes’ Soriano will feel hard done by.

What are your thoughts on this penalty rule, aren’t keepers already at a disadvantage without having to wait to make their move?