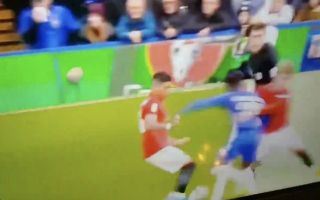 Chelsea winger Callum Hudson-Odoi ended up in the crowd after a clash with Manchester United defender Brandon Williams on Wednesday night.

The Blues are hosting the Red Devils at Stamford Bridge in a Carabao Cup fourth-round tie this evening, which is currently locked at 1-1.

A Marcus Rashford penalty gave the visitors the lead in the 25th minute, but Chelsea have found their way back into the game thanks to a superb Michy Batshuyai strike on the hour mark.

United youngster Williams has been a standout performer for Ole Gunnar Solskjaer’s side on the night, keeping Hudson-Odoi quiet on the left-hand side of the defence.

The 19-year-old hurled the England international into the Chelsea stands when tussling for the ball at one stage – showing off his surprising strength in the process.

Hudson-Odoi returned to action unscathed moments later, but there was concern from Chelsea staff after the initial impact left him floored on the sidelines.

Brandon Williams bodying Hudson Odoi to watch the game with the fans?? pic.twitter.com/CAKFZpis97