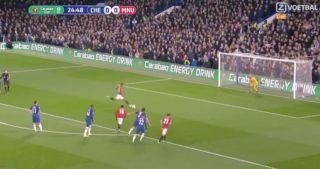 Manchester United finally scored a goal from the penalty spot after Marcus Rashford kept his cool to score from the spot in his side’s League Cup clash vs Chelsea at Stamford Bridge.

With the game just 24 minutes old, the Red Devils were awarded a penalty after James was fouled by Alonso in the box, with England international Rashford stepping up to convert the spot-kick.

This was United’s first converted spot kick in their last three attempts, as both Rashford and Martial missed against Norwich at the weekend.

United fans will surely be able to forgive the youngster for his miss against the Canaries following this strike against Lampard’s side.