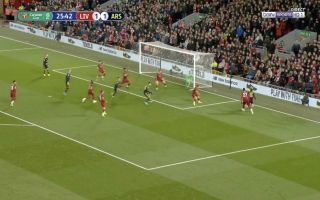 Gabriel Martinelli has fired Arsenal in front against Liverpool in a Carabao Cup fourth found tie on Wednesday night.

Liverpool took the lead thanks to a Shkodran Mustafi own goal in the sixth minute at Anfield, but the Gunners have since managed to fight their way back into the contest.

Lucas Torreira’s close-range finish drew Arsenal level on the quarter-of-an-hour mark, and the Uruguayan midfielder has also had a huge hand in the visitors’ second goal of the game.

Torreira’s quick free-kick caught Liverpool’s defence cold and Ainsely Maitland-Niles was able to capitalise, firing a low cross into the middle of the penalty area which rebounded into the path of Martinelli, who smashed the ball into the roof of the net.

Check out the Brazilian striker’s goal below, via Twitter.