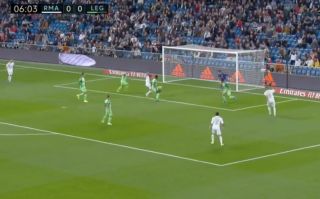 Real Madrid scored twice in just a minute and a half against Leganes this evening, as Los Blancos took an early 2-0 lead in La Liga.

With the game just six minutes old, Real took the lead after a Benzema cross was turned into an empty net by Brazilian youngster Rodrygo.

The home side then doubled their lead just 90 seconds later, after a ball into the area was turned home by German international Toni Kroos.