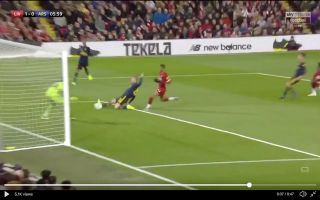 Liverpool have been gifted an early lead in their mammoth Carabao Cup clash with rivals Arsenal tonight, Gunners defender Mustafi has scored an own goal.

Just five minutes into tonight’s mammoth encounter between Liverpool and Arsenal, the Reds were gifted the lead after Shkodran Mustafi turned the ball into his own net.

Former Arsenal star Alex Oxlade-Chamberlain charged down the right wing before firing a low cross into the box, youngster Rhian Brewster looked as though he was going to battle to slot the ball into the back of the net.

Mustafi’s attempt to stop the ace from scoring ended in misery as the ball the hit his knee before hitting the back of the net.

Here’s how Liverpool were handed the lead:

This will be a massive blow to Arsenal, conceding so early will completely change the side’s approach to the game. The Gunners have suffered a nightmare on the eve of Halloween.