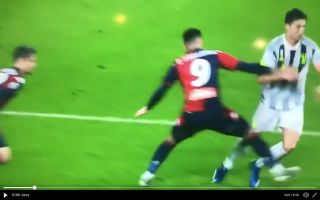 Some fans have slammed Cristiano Ronaldo for a ‘shameless’ dive to win a game-winning penalty for Juventus in their Serie A clash against Genoa tonight.

In the final moments of Juventus’ Serie A clash with Genoa this evening, superstar Cristiano Ronaldo used his trademark silky stepovers before being brought down by forward Antonio Sanabria.

While it doesn’t look as though this was the hardest challenge, it seems as though there is contact here – without further replays we can’t say if this is a dive or not.

Someone tell me this isn’t a dive #SerieA #Juventus #Ronaldo pic.twitter.com/n4KALM6I1f

Here’s how some football fans reacted to the decision to award a penalty:

Incredible of Ronaldo to score a penalty against Genoa after a shameless dive and performance. GOAT ??

That was a clear dive kiddo.. you are shameless just like Ronaldo..
Hez the expert in diving.

Ronaldo’s penalty was a dive?

A Ronaldo dive and then a penalty to win, some things never change #JuveGenoa #juventus

Sure it was a bit of a dive, but there was clear contact, it wasnt a Neymar dive where he wasnt even touched. That was just smart from Ronaldo.

Pure dive man. I love Ronaldo but that’s a dive

Claims that this is possibly a dive could just be a way for some of the five-time Ballon d’Or winner’s critics to try and throw some shade onto his name.

Until further camera angles are introduced we won’t know for sure if this was a dive by the Portuguese superstar or not.

What are your thoughts on the situation?