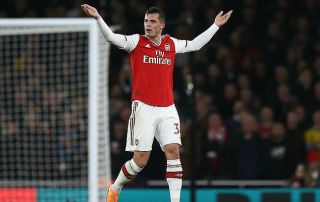 The fall-out continued this week following Granit Xhaka’s reaction to Arsenal fans at the Emirates, as it raised question marks over his captaincy.

The 27-year-old was substituted in the 2-2 draw with Crystal Palace at the weekend and proceeded to throw the captain’s armband at Pierre-Emerick Aubameyang before egging on the Arsenal fans as they jeered him for taking so long to get off the pitch.

After almost seemingly blanking Unai Emery, he took his shirt off and went straight down the tunnel before becoming a major topic of conversation over the last few days.

Debate has raged on over whether or not he should be stripped of the captaincy and perhaps even dropped from the team, but according to The Mirror, Xhaka has the full backing of the Arsenal dressing room to remain as captain.

Emery has yet to reveal his decision and so perhaps we’ll get answers this weekend when Arsenal face Wolves at the Emirates on Saturday afternoon, but based on the report above, it would appear as though the players at least are sticking with their vote for captain.

Time will tell if the Swiss international can now put in a performance worthy of being the Arsenal captain and get the fans back on side if some were left fuming with him last week.

For now though, and it could be an influence on Emery’s decision, it seems as though the Arsenal players don’t want the armband to be passed on.

Xhaka being subbed off pic.twitter.com/VIQsnhFBoC