I’m fairly confident that this has been done hundreds of times before but the world needs another Halloween inspired starting XI. Before we get onto the main team, there’s a couple of formalities and honourable mentions to get through.

The team will be managed by Louis van Ghoul, and instead of his Red Army this is now his Dead Army. It was tempting to name them after another deceased club like Rangers, but it might still be a bit too soon for that.

It’s likely that the prospect of the full season being managed by Unai Emery might be terrifying to Arsenal fans, but he comes a distant second.

The team will also play there games at the now vacant and possibly haunted Vicente Cauldron, formerly home of Atletico Madrid.

A couple of players were forced to miss out, mainly due to their names taking up the entire pitch. Therefore the subs bench can be filled with former Norwich striker Ricky van Werewolfswinkel and former Arsenal and Chelsea keeper, Petr Cech under the bed for monsters.

Here is how the starting XI lines up: 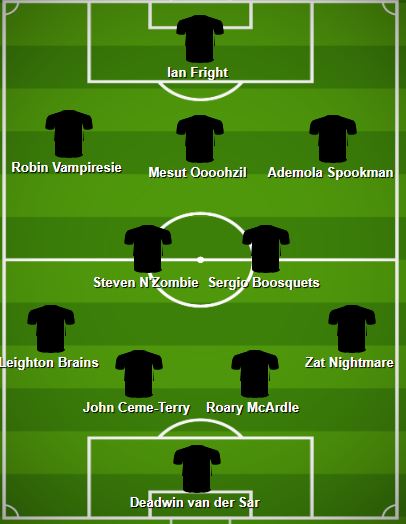 That should be enough to scare any opposition.