Following last night’s thriller against Arsenal at Anfield, Liverpool resume their Premier League campaign this weekend and they take on Aston Villa.

Like the Reds, Dean Smith’s team also booked their place in the quarter-finals of the Carabao Cup by beating Wolves 2-1 last night. Aston Villa are currently 15th in the Premier League but they’ve had a fairly decent home record this season, having gone unbeaten in their last five matches.

However, Liverpool are heavy favorites to beat the Championship winners on Saturday. The last time Jurgen Klopp’s side played at Villa Park, they won 6-0. That result may repeat this weekend if the Reds are at their lethal best.

At goal, there’s no doubt that Alisson will be present. After failing to keep a clean sheet against Manchester United and Tottenham, the Brazilian will definitely try his best to do so this weekend.

In defence, Dejan Lovren seems the most likely candidate to partner Virgil van Dijk at centre-back given that Joel Matip will be out for a while. Andy Robertson and Trent Alexander-Arnold should start as usual with Joe Gomez most likely being on the bench.

In midfield, Klopp might go for the trio of Fabinho, Georginio Wijnaldum and Jordan Henderson but it shouldn’t be much of a surprise if any of them is replaced by Alex Oxlade-Chamberlain who scored a brilliant goal against Arsenal last night.

With Mohamed Salah, Sadio Mane and Roberto Firmino all being rested for last night’s match, the trio will most likely feature on Saturday. All three forwards have been in fine form this season so far and will be keen on finding the net at Villa Park this weekend. 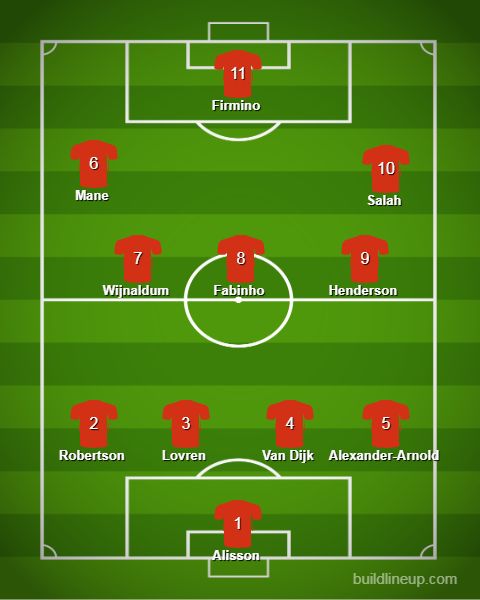