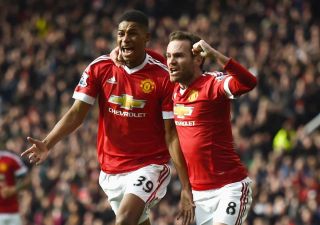 Marcus Rashford had himself a night on Wednesday as his brace fired Man Utd past Chelsea and into the quarter-finals of the Carabao Cup.

It was a crucial win at Stamford Bridge to keep United’s upturn in form going, and his second was an absolute piece of magic as he scored with a free-kick that earned him comparisons to Cristiano Ronaldo.

SEE MORE: ‘Keep making Utd proud’ and ‘buzzing for you’ – These Man Utd fans react as loanee continues to impress for Euro giants

With more pressure and responsibility on his shoulders this season, Rashford is stepping up for the most part, and now 22 years of age, he’ll hope to continue to improve, develop and mature to become a leader of this Man Utd side moving forward.

However, it was all about celebrating not only the midweek win over Chelsea, but also his 22nd birthday and Juan Mata treated us to a quality throwback image of Rashford when he was a kid dreaming of nights like last night.

As seen in the Spaniard’s tweet below, he specifically loved how his teammate had written his name on the football he’s got just to make it clear to everyone who it belongs to, while Rashford joked back and told Mata to stop going through his phone.

Quality banter lads, but in fairness it’s great to see how far Rashford has come to date, and he’ll certainly hope that there is plenty more to come in the future for the Red Devils as they continue to battle for trophies and a top-four finish in the Premier League this season.

Stop going through my phone Juan ??