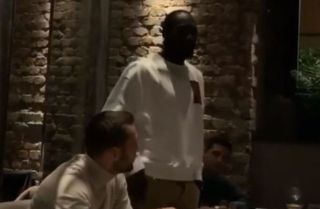 Things are going well for Romelu Lukaku at Inter so far this season, and it appears as though he’s building strong bonds on and off the pitch.

As noted by BBC Sport, the 26-year-old joined the Nerazzurri from Manchester United in a deal said to be worth £74m this past summer.

With such a hefty price-tag and a big role to play as Antonio Conte’s talisman up top, the pressure was on the Belgian international to deliver.

Deliver he has as he’s bagged seven goals in 10 Serie A appearances so far this season, and that in turn is helping Inter apply significant pressure on rivals Juventus at the top of the table.

Time will tell if he can maintain it, but after his disappointing and underwhelming campaign last year with United in terms of his lack of goals as he managed just 15 in 45 games, he looks reenergised and confident again.

To further reinforce that he’s loving life in Milan with his new teammates, SportMediaset report that he invited the rest of the squad to dinner and paid for it this week, with the report going on to reveal what he is believed to have said to the players.

“Thank you all for being here,” he told his teammates, as per the report above. “I am very happy to be with you. Thanks for the help you give me, this group is special.”

Time will tell just how special the group is depending on whether or not they can win trophies at the end of the season, but there is certainly a different atmosphere and feeling with Inter this season as they look capable of kicking on and competing for the Scudetto rather than merely being in a battle for a top-four finish to secure Champions League qualification.

If Lukaku can continue to fire in the goals, then they will certainly feel confident about their chances of pushing reigning champions Juventus all the way.