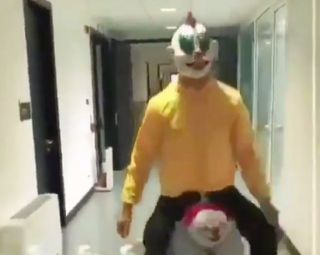 Cristiano Ronaldo thought he’d take Halloween to the Juventus training facility on Thursday and his better half clearly enjoyed it.

The Portuguese superstar scored a last-gasp penalty for his side to secure a 2-1 win over Genoa on Wednesday night, with the three points moving them back to the top of the Serie A table.

While they look set for a battle with rivals Inter for the title this season, they are clearly in good spirits off the pitch still and their talisman thought he’d enjoy himself and have a bit of fun on Halloween.

As seen in the video below, he was filmed walking through the training facility and bumping into some of his teammates, although Miralem Pjanic and Wojciech Szczesny hardly looked terrified with what they were seeing.

One person who was left laughing it seems was Georgina Rodriguez, as she commented on her partner’s video on Instagram with a string of crying laugh emojis, and so she clearly enjoyed Ronaldo’s attempts to bring Halloween to the Juventus squad.

With Juve not in action until Saturday night when they face Torino in the Derby della Mole, perhaps Ronaldo will be orchestrating the Halloween party antics for the rest of the squad tonight…