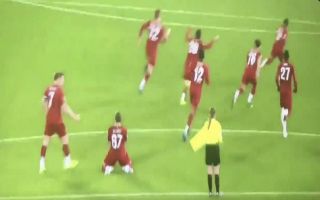 Teenage midfielder Harvey Elliott dropped to his knees in joy after Liverpool defeated Arsenal in a Carabao Cup fourth-round tie at Anfield on Wednesday.

A last-minute Divock Origi goal levelled the scores at 5-5 after a breathless 90 minutes of action at Anfield last night, during which Arsenal twice threw away a two-goal lead.

In the end, spot-kicks were needed to decide who would be in the hat for the quarter-final draw, with both teams calmly dispatching their first four penalties.

Dani Ceballos was the only man unable to convert from 12 yards, as he saw his effort saved by Liverpool goalkeeper Caoimhin Kelleher, which gave Curtis Jones the chance to win the match.

The 18-year-old smashed the ball into the bottom corner to complete a stunning turnaround and Elliott’s emotional reaction to the winning penalty surely summed up how most supporters felt after the contest.

Elliott was taking in only his second senior appearance for Liverpool since a summer move from Fulham and he was right in the thick of the action throughout, even winning the penalty which James Milner dispatched to make the scoreline 3-2 late in the first half.

The 16-year-old was consoled by James Milner after dropping to the floor after the final whistle, as you can see below, via Twitter.

Look at Harvey Elliott here, youngest player to make a debut at Anfield and look what this win means to him. Great potential for this lad pic.twitter.com/eFRlTW1Wgt