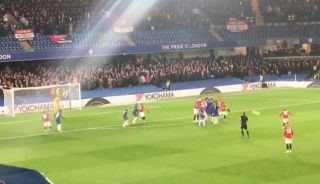 Marcus Rashford produced a moment of absolute magic for Man Utd in their win over Chelsea in the Carabao Cup in midweek.

The Red Devils ran out 2-1 winners at Stamford Bridge to advance to the quarter-finals, with Rashford scoring twice to book their spot in the next round.

While the first was from the penalty spot, the second was an absolute beauty of a free-kick from distance which drew comparisons with Cristiano Ronaldo’s technique.

As seen in the video below, it looked even better from angles within the stadium, as this fan footage shows the dip and accuracy on the shot to give the goalkeeper no chance.

It was a stunning strike from the Man Utd forward, and Rashford will no doubt take a lot of confidence and belief away from it knowing that he can now deliver from set-pieces too in order to add another dynamic to his game.

This angle of Marcus Rashford's free kick against Chelsea is absolutely unreal. What a bloody strike. UNREAL! pic.twitter.com/BGTuFV8Bkg 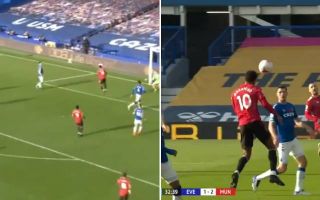