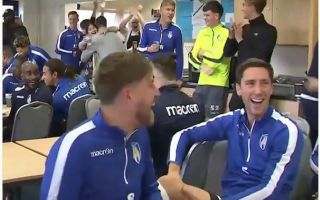 In a time where cup upsets are less common due to the incredibly large financial gulf between clubs, it’s often the draw and the reaction to the draw that provides the most excitement.

Colchester United made the quarter finals of the Carabao Cup so they could’ve got stuck between hoping for the easy draw or wanting to go out in a blaze of glory.

Although Man United aren’t quite as dominant as they once were, it still seems the prospect of a trip to Old Trafford is huge for lower division players. This clip from Sky Sports shows how delighted they were when the draw was announced:

It does look like this could be on of United’s best chances to win something this season so there’s a lot on the line. The match will be played in mid December but no exact date has been set yet.