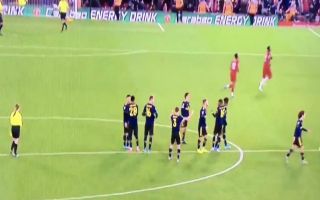 Arsenal defender Kieran Tierney stopped his teammates from heading back to the dressing room after a penalty shootout loss to Liverpool on Wednesday.

The Gunners were beaten 5-4 on spot kicks after an enthralling 90 minutes of action at Anfield which saw both sides share 10 goals evenly to draw 5-5.

Arsenal twice threw away a two-goal lead in the match, with Divock Origi scoring an all-important final equaliser in stoppage time to send the home supporters into raptures.

After Liverpool substitute Curtis Jones dispatched the winning penalty in the shootout, a number of Arsenal players started to walk towards the tunnel.

However, summer signing Tierney urged his teammates to stay on the pitch and thank the travelling Arsenal supporters who made the trip to Merseyside, in a classy gesture which shows his leadership qualities.

Liverpool progress to the next round.

The Gunners may be on the lookout for a new captain with Granit Xhaka currently in the headlines for all the wrong reasons and Tierney might have emerged as a surprise candidate for the armband after his impeccable conduct at Anfield.

Check out Tierney’s reaction to Liverpool’s winning penalty below, via Twitter.

Tierney is pure class here – he gets it already ???? pic.twitter.com/0TFnk7shW5

Kieran Tierney, as the final penalty went in, grabbed all the players and told them to go thank the away fans ? pic.twitter.com/3aBQZkSmV0

Love this from Tierney, gets all the players to applaud the away support after the penalty shoot out. ?? pic.twitter.com/L2Q8AJiyBk