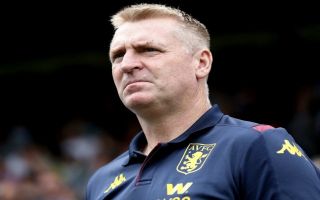 Aston Villa boss Dean Smith has insisted that Jack Grealish could be available to feature against Liverpool this weekend despite a calf injury scare.

The 24-year-old has overcome a slow start to the campaign and now has four goals and four assists in 12 appearances for Villa so far this season.

Although they were able to advance in the Carabao Cup without him in midweek, Grealish will undoubtedly be fundamental to their hopes of avoiding relegation this season as they look to bounce back from their defeat to Manchester City last time out.

After picking up a calf injury in that clash at the Etihad, there would have been concern over Grealish’s availability for Villa on Saturday as they host Liverpool, but Smith has allayed those fears and has suggested that his talisman and captain could be fit to play.

“He’s OK. He’ll be pushing to be fit for Saturday. He wasn’t fit (for Wolves) but I wouldn’t have picked him anyway. He’s responded really well,” he is quoted as saying by Sky Sports.

“I never worry too much when it’s a contact injury, a dead calf – he’s got a small bleed on his calf and he’s responded well to treatment.”

Time will tell if the Villa medical staff give Grealish the green light or not, but it will give Liverpool something to think about if he is passed fit, as they’ll have to find a way to nullify his threat if they are to come away with all three points this weekend.

Villa sit in 15th place after 10 games having picked up 11 points, but given they’re just three points above the relegation zone, they’ll be desperate for a positive result on Saturday while Liverpool will hope to maintain their six-point lead over Man City at the top of the standings.