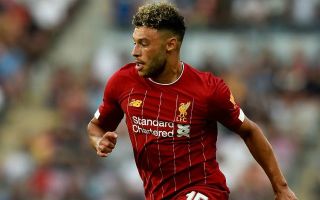 Liverpool midfielder Alex Oxlade-Chamberlain has admitted that he was not too thrilled with his performance in the Carabao Cup fixture against Arsenal.

The 26-year-old scored a fine goal against his former team as the Reds won on penalties to reach the quarter-finals of the League Cup. Oxlade-Chamberlain now has three goals to his name this season in 11 appearances across all competitions.

SEE MORE: “Talent of the century”: Some good news for Arsenal fans as Klopp heaps praise on Gunners wonder-kid

Despite scoring, the England international said that he was not too thrilled with his performance against Arsenal. As quoted by the Mirror, Oxlade-Chamberlain said: “Quality-wise, I am not too happy with my performance to be honest. I wasn’t great on the ball and not near my own personal level of where I want to be. I put in a good shift and run a lot. I watch the boys of a weekend and I know what it is about here. You have got to be at a really high physical level to go and put in a performance like that. Fab (Fabinho) did really well at the weekend so I need to keep pushing myself and maybe I will get a chance.”

Liverpool have a number of quality players in midfield which has seen Oxlade-Chamberlain being on the bench more often than not. However, given the England international’s performances, he could well find more first-team opportunities as the season progresses.

He has the desire to improve and with this attitude, the midfielder will certainly produce better displays on the field. It will be interesting to see if Jurgen Klopp picks him in his team sheet for this weekend’s fixture against Aston Villa at Villa Park.