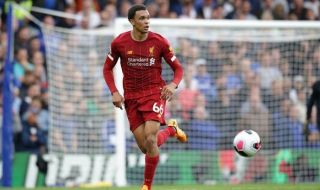 Liverpool right-back Trent Alexander-Arnold has said that he dreams of being the club captain some day.

The 21-year-old joined the Reds’ youth setup in 2004 and made his debut for the senior team in October 2016. So far, Alexander-Arnold has made 99 appearances for Liverpool, scoring five goals and providing 23 assists. Last season, the right-back was included in the PFA Team of the Year as well as in the Champions League Team of the Season.

SEE MORE: ‘Luckily my name was there’ – Alexander-Arnold reveals priceless story on how his Liverpool career began

Alexander-Arnold has said that he dreams of becoming Liverpool’s captain some day. Speaking to BBC, the England international said: “I am not shy in saying that [being captain] is a dream for me. Whether it comes true or not is not up to me; I don’t pick who is captain. But that is something I would love to do one day. Captaining Liverpool is something I have always dreamed of and it is something that motivates me.”

Alexander-Arnold has established himself as one of the finest right-backs in the world thanks to his performances for Liverpool. He has been a part of the Reds for 15 years now and even though he might not succeed Jordan Henderson anytime soon, the 21-year-old could well be wearing the captain’s armband at some point in his career.

Liverpool’s next fixture is against Aston Villa tomorrow and Alexander-Arnold will most likely start which would mark his 100th appearance for his boyhood club.