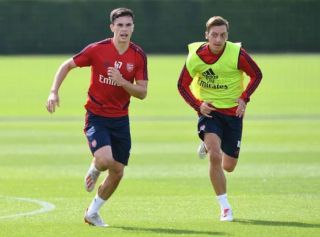 Arsenal manager Unai Emery has said that Mesut Ozil has a chance of featuring in today’s fixture against Wolves at the Emirates.

The Gunners are currently fifth in the Premier League and need to win today’s match to narrow the gap between them and the top four. Ozil made only one appearance for Arsenal in the league this season and that was against Watford. However, the 31-year-old might be more of a regular under Emery after his performance against Liverpool. Ozil managed an assist in the thriller at Anfield which saw the Reds just edging out on penalties.

Emery has said that Ozil is looking positive and could feature against Wolves. As quoted by Goal.com, the Gunners manager said: ”He is in the squad and I think he has the possibility to play. I spoke with him on Tuesday. I said to him every time what is my plan with him. When he’s available, when he’s training well, when he’s consistent, when he’s positive he can help us a lot.

”Now I am seeing him positive and consistent. On Wednesday with his performance in Liverpool, I think this is the way we want. Also I am helping him, supporting him, demanding of him. This is the Mesut I think everybody wants.He has big experience. When you talk about players who are ready to play under high pressure, one is Mesut Ozil.  I think he has confidence and I think he has respect. When he is in that positive way, when he is available consistently, he has the respect from us and from every supporter.”

An in-form Ozil could is always a massive asset to Arsenal and Emery might give him more playing opportunities after his display against Liverpool.

A win for the Gunners against Wolves will see them remain in 5th position in the Premier League table but a defeat could see them drop down.