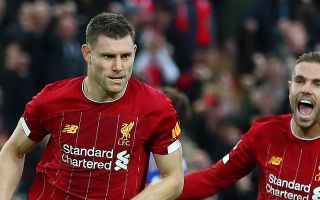 Liverpool completed a truly dramatic comeback against Aston Villa at Villa Park this afternoon, as the Reds maintained their six point lead at the top of the Premier League.

Having fell behind thanks to a first half goal from Mahmoud Trezeguet, the Merseyside club ended up completing a dramatic comeback thanks to goals from Robertson and Mane.

The Scot’s 87th minute header drew the two sides level, with Mane’s last-gasp goal from a corner handing his side all three points in the west Midlands.

Following the game, Liverpool ace James Milner took to his personal Instagram account in order to joke about his side’s dramatic turnaround at Villa Park that took place today.

?? Health Warning ?? If you suffer from anxiety or heart problems it’s not advisable to support LFC ? #loveitrobbo #nevergiveup #YNWA

Milner joked that those with heart problems shouldn’t be following Liverpool, something that’s a reference to their dramatic comeback against Dean Smith’s side.

Following today’s win, Liverpool are now six points clear of Man City at the top of the Premier League, and should they beat Guardiola’s side at Anfield next week, that gap is only going to get bigger.

If today’s result is anything to go off, it seems like this year may very well be Liverpool’s year after all…